The Sodexo team at Brethren Village, with seven managers and 120 employees, has been working hard to add more choices and innovative touches to menus in the Village Center’s seven unique concepts, as well as interactive lunch-and-learn events.

Having multiple concepts has cut down on troublesome lines at mealtimes. Here, the Chef’s Table concept offers comfort foods and Sodexo’s line of Mindful recipes; The Bistro Grille features the all-important, all-American burger, but one that definitely leans toward the enduring “better burger” trend, as well as hand-cut fries, creative burger combos and Angus beef; and Neapolitan is a pizza station that also menus calzones and casseroles.

Warfel Construction, the firm responsible for the renovation, reported that occupied campuses are challenging work environments, so the project required care so as not to disturb the adjacent bank, gift shop, library and pharmacy in the main hub of campus. Temporary partitions were in place so residents could safely get from place to place.

The upgraded look of the bistro has turned the space from “a dated, dark coffee shop to a modern, inviting café,” Warfel Construction stated in a report. Skylights, nice finishes, new tiles and, of course, a state-of-the-art pizza oven are all part of the improvement.

At the Bistro’s Clark café, this intriguing burger is a wild combo of a kobe beef slider, peanut butter, jelly and vanilla ice cream. Who says seniors don’t want to try new things?

The Pennsylvania Dutch culture is highlighted with special menu items like schnitz un knepp, a ham-apple-dumpling favorite of rural families in the area. This dish was served during Chives by Candlelight, a new Saturday-night, white tablecloth experience.

Another great Pennsylvania Dutch-inspired item is this jumbo pretzel with mustard, also served during Chives by Candlelight.

Sushi appeals to the modern senior in Middle America more now than ever before.

Overall, the renovation has been a way to care for residents, Chambers says. “We’re able to accommodate a wide variety of resident dining needs on a continuous basis.” 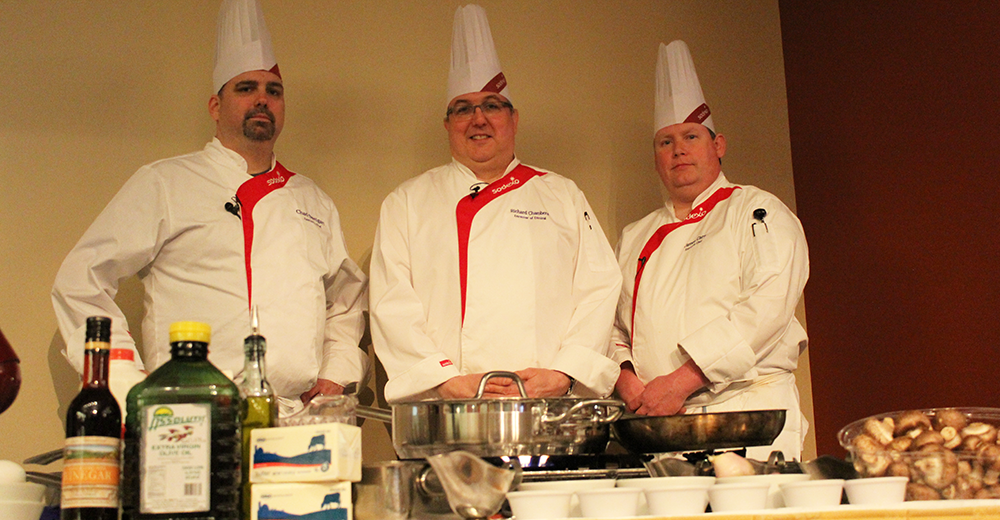