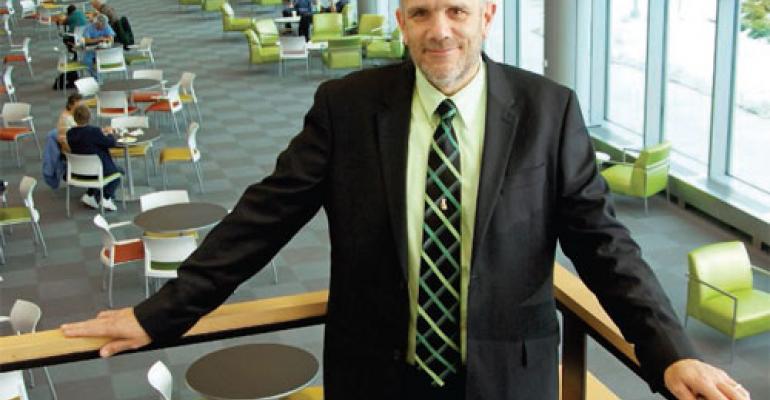 This Penn State alum has overseen the resurgence of one of the largest healthcare systems in the country.

You have to hand it to Bruce Thomas. While many operators struggle to balance their financial need to boost revenues with mandates to increase sales of healthy choices, he's done both. Thomas has built sales and participation at Geisinger Health System even as he switched out fatty favorites for more healthful options and grew sales of those as well.

In the first year of Geisinger's healthy dining program, overall foodservice sales grew by more than eight percent and customer counts were up by 34,000 transactions. In fact, under Thomas' leadership over the past dozen years, retail and catering sales at Geisinger have grown 228%.

It is for pulling off feats like that, as well as for his forward-thinking leadership, especially in using cutting edge technology to build efficiency and increase service, that IFMA chose to honor Thomas with the 2011 Silver Plate Award in the Healthcare category. (For more on Geisinger's foodservice program, see the August 2009 FM.)

Thomas, who grew up near the Geisinger campus in Danville, PA, began in the food business by working the usual college restaurant jobs. He became interested in pursuing a career in the field, earned a degree from Penn State's Hospitality School and ended up managing food and beverage operations at the Hotel Magee in Bloomsburg, PA.

Magee had a booming catering business and Thomas managed it with aplomb, but after eight years he knew he had to find a way to slow down before he burned out. So he took an opening at Geisinger for a position that seemed somewhat of a comedown: managing one of the hospital's kitchens.

At first, he struggled with the unfamiliar world of hospital foodservice, but a sympathetic director gave him new responsibilities that allowed him to look at the department from a broader perspective. Most significantly, Thomas was put in charge of bringing a new information system on line, an experience that jump-started a long-term interest in how automation and technology can be used to benefit operations.

Today, under Thomas' leadership, Geisinger is one of the healthcare segment's leading automated operations.

The systems deployed first by the foodservice department have also proved to benefit the larger enterprise. The cashless payment system Thomas piloted has now been adopted system-wide at Geisinger for all retail cash transactions, while the Temp Trak temperature monitoring system, originally installed for use in the foodservice operation, is now also deployed in departments like nursing and pharmacy.

Thomas eventually ascended to the title of foodservice director for the Geisinger system (and more recently to an associate VP position in charge of numerous auxiliary services), a role in which he worked not only to upgrade systems but add customer-friendly features like the EZ Takes grab-and-go program and creating themed destinations at Geisinger's 11 retail operations even as he reduced the number of SKUs in inventory from more than 2,500 to under 1,700.

Then there is the Geisinger Healthy Selections program, which relies on emphasizing healthier options rather than simply eliminating unhealthy ones. It was that approach that led to a reduction in burger and fries sales in favor of more sales of healthier items that are attractively designed and merchandised.

Meanwhile, his track record has instilled confidence in Geisinger's administration to green-light further projects. In just the last year, he secured funding for three major initiatives: a $16 million expansion of the foodservice program on the main campus — including a new kitchen, dining facility and patient room service; a $4 million renovation/expansion of the Pine Barn Inn Restaurant & Hotel that is part of Thomas' responsibilities at the medical center; and a $2.5 million replacement kitchen in the Marworth Drug & Alcohol Rehab Center.

My first real job was at a grocery store, and I found I really liked the service industry. I worked some restaurant jobs while in college and by then I knew that was the career path I wanted to take.

I had met this guy in college when he came up to do a demonstration. He knew I was from the Bloomsburg area and was looking for a place to work for the summer. He told me about the Magee Hotel, which was only 30-40 minutes away from my home. I was hesitant, but he said, ‘Well, just come on down and work a function with us.’ So I came down the night before, they put me up in the hotel, I then got up around three in the morning and started at 4 a.m. and worked straight through until 1:30 a.m. the next day. And I came back!

It was the hours at Magee that got to me. Our first child was born in ’84 and I really didn’t see her growing up those first two years. After our second child was born in ’87, I knew that while I loved the business, I couldn’t keep doing what I was doing. I needed to find something else to do because I was burning out.

I started at Geisinger with the strange title of “administrative diet technician.” Don’t ask me what that was because I really don’t know, but in essence I was the kitchen supervisor.

I learned computers on the fly. Back then we were working with DOS based systems, and there was only one PC in the department, so you had to leave your desk to go to it. Still, it gave me the opportunity to learn what really was going on in the department because as we brought recipes and inventory systems on board, I really got an opportunity to look at the systems overall and realized it’s really not all that complex. Or rather, it is complex, but not as complex as I was led to believe.

Around 1990, I realized that, in the healthcare environment, if you’re going to grow in your career, then you have to get educated more. So I went back to school and got my Masters degree in business. I spent five years doing that, after work, after running kids around to wherever they needed to be. So it took a little while.

I see my role as more strategic than operational, but foodservice is still my passion. It’s what I grew up in. I’ve learned a lot about other departments, I have some interesting departments that I work with, but foodservice is where my heart and soul is. I still have my chef’s jacket hanging on the door here in my office, but unfortunately, it probably only gets worn about once a year at the holidays. And then they generally don’t want me in the kitchen anyhow…

I learned early on as a foodservice director about the power of having information at your fingertips. A lot of people out there have information systems, but many only tap into a small percentage of what’s available. At Geisinger, we’ve taken full advantage of technology: it’s doing all of our purchasing, our inventory, all our recipe maintenance—the nutrient analysis, the menus, the diet office, catering. We utilize that technology to run our operation and by doing so I just have this wealth of information available.

It got to the point where our SKUs grew to 2,500-2,600 items and we just made a concerted effort to sit down and ask, ‘Do we really need this item? Can we consolidate?’ I remember sitting down one day and having our storeroom people bring every paper item that we stocked—one of each. Brought ‘em in and sat ‘em on a table. It was eye opening.

What do people usually see when they walk into your operation? It’s burgers and fries! Okay, so what are people going to buy? Burgers and fries, because you have them there. But if they walk in and the first thing they see is a nice fruit display and a nice salad bar that looks good, you’ll get them to buy that.

Our temperature monitoring system is a good example of how we implement new technology. We rolled that out in foodservice, first bringing 20 coolers up on it, then 25…30. Then we rolled it out to our sister hospitals, first in foodservice, then to all the nursing units and so forth. It’s now become this big system, but it all started in the kitchen where I got tired of telling people to fill out the temperature sheets.