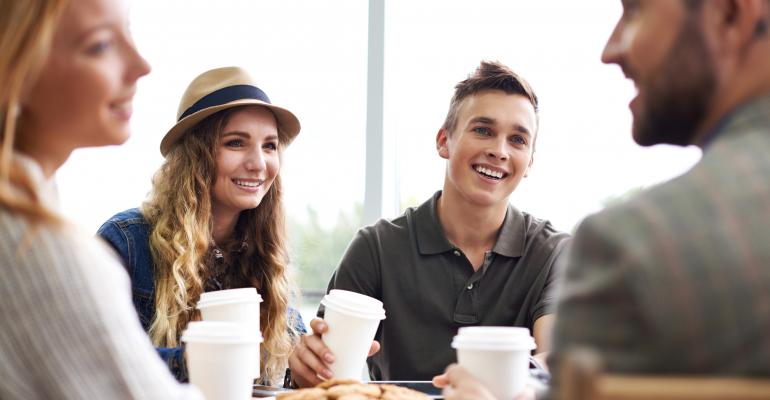 Many colleges and universities have jumped on the sustainability bandwagon in recent years. That commitment to composting, restricting water usage, lowering food waste and other measures serves as a way to engage students who increasingly consider an institution’s environmental practices when making a decision about where to attend.

Being a good environmental citizen is admirable, but you can’t necessarily take it to the bank. Sustainable practices which help improve the bottom line, on the other hand, are more compelling.

ValidFill, a self-serve beverage technology from Whirley-DrinkWorks!, fulfills the twin objectives of sustainability and profitability. Campuses where students, faculty and others use ValidFill’s Radio-Frequency Identification (RFID)-equipped reusable drink vessels in tandem with Coca-Cola Freestyle self-serve beverage dispensers are scoring multiple wins by reducing disposables and strengthening the sales and profit potential of beverages.

ValidFill reusable vessels form the centerpiece of a semester-long, all-you-can-drink plan that typically sells for around $30. Some colleges offer the mugs or bottles preloaded with a small number of free pours to encourage trial, after which students can sign up for drink packages or an unlimited plan.

Owners of the mugs or bottles can use them at Coca-Cola Freestyle units on campus to dispense and personalize a huge variety of beverages. Students like the freedom to customize their drinks, the value, the environmental message and the convenience — the RFID technology allows them to skip cashier lines if they’re simply looking to quench their thirst.

Campus operators using ValidFill have reported that one refillable vessel used for the entire school year contributes an average of $88.20 in profit. That figure reflects lower costs of consumables, incremental profit from food purchased along with the beverage and fountain contribution.

At Champlain College in Burlington, Vermont, some 750 reusable mugs are in circulation this semester. As a result of rolling out the ValidFill program in the fall 2015 semester, the reduction in disposable cups, lids and straws saved more than $4,500 through the end of March 2017, says Rich Dietrich, retail manager. Since the beginning of the 2016-2017 school year the college has kept nearly 21,000 items of trash — cups, lids and straws — from ending up in landfills.

Not only is usage of disposables dropping, but so is waste. “We have found that the syrup cost has gone down because people using the ValidFill mugs take them out with them instead of throwing them away. Often disposables that are half- or three-quarters full get thrown away,” Dietrich says.

The reusable mugs and convenience of the Coca-Cola Freestyle dispenser at EATS, Champlain College’s food court style retail space, has changed other behaviors as well. Students can pour refills from the dispenser from 7 a.m. until 2 a.m.

“It’s affording us the opportunity to grab those incremental sales,” Dietrich says. “If students didn’t have the mug, they might not come in to get fries and tater tots. It keeps people there a little longer, and if you sit there a little longer you might smell the pretzels baking or the French fries being made, and you end up buying something,” he adds. Having the unlimited refills also provides a strong incentive for students to choose EATS over off-campus restaurants and food retailers.

College and university dining operators have found a variety of ways to spur adoption of the Whirley-DrinkWorks! ValidFill vessels.The Ohio State University in Columbus, for instance, distributed bottles to all incoming first-year students and returning second-year students personalized with the student’s name, and they were given 10 free fills. SUNY New Paltz in New Paltz, New York, has incentive programs for their employees to upsell the students in to the sustainable bottle program. Champlain College sets up signup tables during the first few weeks of the semester, keeps a display of the mugs at cashier stations and promotes the vessels in social media channels.

The reusable vessels have become coveted prizes for clubs at Champlain College, and Dietrich says the school is looking for other ways to leverage them. Currently, the school distributes water bottles to students at the beginning of the school year, but there is a good chance that those will be replaced by ValidFill bottles loaded with 10 free beverage fills. A combined program that would offer unlimited Coca-Cola Freestyle and coffee is under consideration as well.

The ValidFill program “is a win-win for eco-friendly campuses as well as smart savings,” Dietrich says. “It requires very minimal work and we have seen an increase in sales.”