There are 12 residential colleges at Yale. In each college there is a dining hall, where students are served at family-style dining tables. The Commons Dining Hall is lovingly referred to as Hogwarts, from the “Harry Potter” fame. This is an excellent example of the beautiful architecture found on the New Haven campus. The Commons is the largest dining hall. The first students at the Commons were served at the table by men in tuxedoes. While the dining operation has been updated—students now serve themselves and there’s not a tux in sight—there’s still a lot of history in the building. In addition to the dining hall, there is a small retail operation with grab-and-go items in the Commons.

In stark contrast to the Commons, the dining hall at Morse features a modern design. Production for the dining halls is done on site (each hall has the same menu with the option for a manager’s special), with the exception of cold prep, which is done at the Culinary Support Center, a massive central production and storage facility and bake shop.

The focal point in the Morse and Ezra Stiles kitchen (the two colleges share the same kitchen/service area but have separate dining rooms) is this large circular grill. Meats from the grill are used in entrées as well as stir-fry bowls, which is a special found at these dining halls.

Yale’s dining program went self-op in 2008. According to Rafi Taherian, executive director of dining services, the department’s goal isn’t about being the best or feeding students; it’s about creating memorable and craveable experiences. One of the areas Taherian felt was lacking to create those lasting experiences was the salad bar. “Normally when people go to a salad bar they have no end in mind for their plate,” Taherian says, meaning diners end up with a mishmash of flavors that might not work well together. To alleviate that Yale dining worked with Joyce Goldstein to create a stable of composed salads. Each day there are three composed salad options at every salad bar: one bean-, one veggie- and one grain-based option.

The dining hall at the divinity school was redesigned 18 months ago to be a more inviting and peaceful space. About 300 covers are done here each day.

The day’s home-style offerings at the divinity school.

Yale’s globally local program works with local restaurants to sell prepackaged items of their meals to go. The program builds brand loyalty between students and local restaurants and is a way for Yale to offer more variety and ethnically diverse meals.

Perhaps the best example of the “modern” Yale is the new School of Management (SOM), a beautifully designed building that opened two years ago. The SOM has two retail dining operations, managed by Adam Millman, director of auxiliary operations. The first is Evans Hall Café, a coffee shop offering coffee, espresso and teas along with a variety of snacks and bakery items. A continental breakfast is offered from 8 a.m. to 11 a.m., with lunch offered from 11 a.m. to 2 p.m.

Millman says he wants to make sure the items he sells in his operations have a special quality to them. For example, he purchases some bakery items from a local outfit that makes vegan desserts. This tea is sourced from Teatulia, a company based in Bangladesh with a mission to fairly treat its workers. The teas are also USDA Certified Organic and Rainforest Alliance Certified.

The other retail operation at the SOM is Charley’s Place, Yale’s largest retail location. Millman wanted this to feel more like a restaurant dining experience. Because the operation is in a tight footprint, Millman needed a way to ensure long lines didn’t back up. Upon entering the space, diners submit—and pay for eliminating the need for cashiers—their meals at a station and receive a ticket for their meal. Diners then take their ticket to a production associate who makes the meal to order.

The open layout at Charley’s Place allows diners to see their food being prepared. The space also allows for small cooking demonstrations and classes. The production center was designed so that the chefs are always looking out toward customers and never have their backs to them.

Charley’s Place offers a variety of food from sandwiches, salads, and pizza. The pizza is baked on Fridays only; on other days the pizza oven is used to bake dishes like stews and veggies. Millman describes the food as rustic global meals, a perfect description for this pork dan dan noodles bowl.

Yale’s newest retail op is Café Med, which opened a few months ago in the medical school. The space features healthy Mediterranean items. The location has a coffee bar and a selection of grab-and-go items. Read more about Café Med here >>.

The focal point of Café Med is its build-your-own bowl option. Customers select from a base of grains, greens or a pita and then select from an assortment of toppings to create their healthy mea. 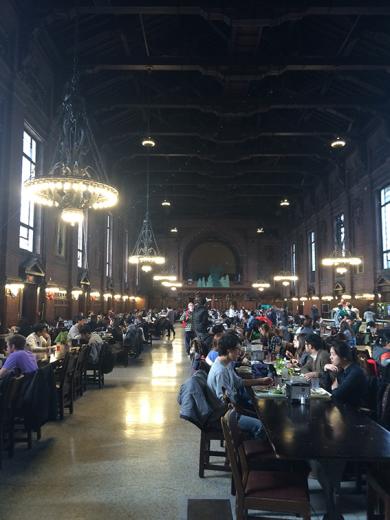