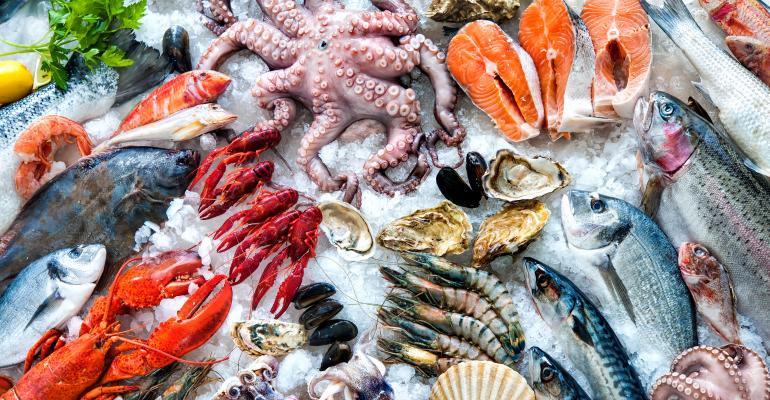 AlexRaths / iStock / Getty Images Plus
Four in 10 of us want to eat a bit less meat, and the top choice is to replace it with fish and seafood.
Operations>Sustainability

Viewpoint: Navigating your way to sustainable seafood with menu appeal

Thanks to a long career in the foodservice world, Arlin Wasserman has become an expert on supply chain, menu strategies and foodservice facts in general. As founder and managing director of foodservice consultancy Changing Tastes, he’s got up-to-the-minute info on where we are now and where we could be going. Here, he zeros in on sustainable seafood with a few solid, realistic ways to get more sustainable seafood onto your menu.

American consumers are poised to eat more fish and seafood. That’s one of the big takeaways from recent research by Changing Tastes into what proteins Americans intend to eat in the year ahead, and it’s great news for foodservice operators looking to advance sustainability efforts, reduce their carbon footprint and grow their business.

Today, only about half of Americans consider themselves regular meat eaters. Over the past year, about one in 11 decided to eat a bit less meat in the coming year as we look for more control over our health because of COVID. All told, four in 10 of us want to eat a bit less meat, and the top choice is to replace it with fish and seafood.

The group poised to drive the biggest increase are the more-than-half of adults who now eat fish and seafood between once a month and once a week. That’s less than the twice-perweek U.S. dietary guidelines.

Millennials and Gen Z make up the largest share of these occasional eaters. They are also more likely to eat some or all of their fish and seafood in restaurants and are less likely to cook it for themselves. That’s a great opportunity for food service operators.

Younger diners are also defining what sustainability for fish and seafood means in foodservice, as they both look to reduce the environmental footprint of their food choices and also understand that their health is connected to the health of our oceans.

Food choices with a smaller footprint

Food service operators aren’t yet as focused on this opportunity as they could, or perhaps should, be. Our research at Changing Tastes found that only about a third of operators are inclined to put more fish and seafood on the menu if they know it has a smaller environmental footprint.

Over the past fifteen years, foodservice operators have led Americans to reduce the amount of red meat we eat. The changes we’ve made in our recipes and menus, including using the plant-forward culinary strategy I developed a decade ago, have reduced the nation’s carbon footprint by 15%. That’s a remarkable accomplishment from just doing our jobs compared to the costly “solutions” debated for the transportation and energy sectors. Additionally, the switch from meat to fish or seafood at just one meal a week can get us to 20% of our nation’s overall reduction goals that President Biden committed to at last year’s global climate change summit in Glasgow.

It’s also important to note that the carbon footprint of different types of fish and seafood varies substantially. Here are five things to consider when working with your seafood supplier to choose the most sustainable choices:

Helping diners switch from meat to fish for at least one meal a week is also critical because, if they don’t make the change, analysis from our research at Changing Tastes shows that the carbon footprint from Americans’ protein choices is poised to increase. Americans have reached the limits on smaller portion sizes, and most have decided not to eat manufactured meat alternatives after giving them a try during COVID. That isn’t to say diners aren’t interested in eating meals made with plants, but they want scratch-cooked foods, not manufactured replacements, while fish and seafood is now our top preference for replacing meat.

What diners know about sustainability and what you can teach them

Diners' concerns about ocean health and what’s in the fish and seafood we eat are making many diners — particularly younger ones and those who eat it occasionally – hesitant to follow through on their intentions to actually eat fish and seafood more often. Mercury and industrial pollutants, microplastics and antibiotics are now all top of mind for diners thinking about whether or not to choose fish and seafood.

Diners’ concerns are also helping the food service industry better define what sustainability for fish and seafood looks like and how ocean health and our health are connected. Food service operators can help diners be more confident about increasing their seafood consumption. Some facts to consider include:

Want a deeper dive? Helping diners not be afraid of the water, and urging them to give fish and seafood a second chance each week, are part of a new messaging platform Changing Tastes recently developed. The new messaging and marketing ideas, along with more market research, are available at www.changingtastes.net/more. These tools are aimed at helping restaurants and others in the food industry use fish and seafood to continue to lead on sustainability and better serve diners.

Eight dishes that use items usually tossed in the trash
May 10, 2022