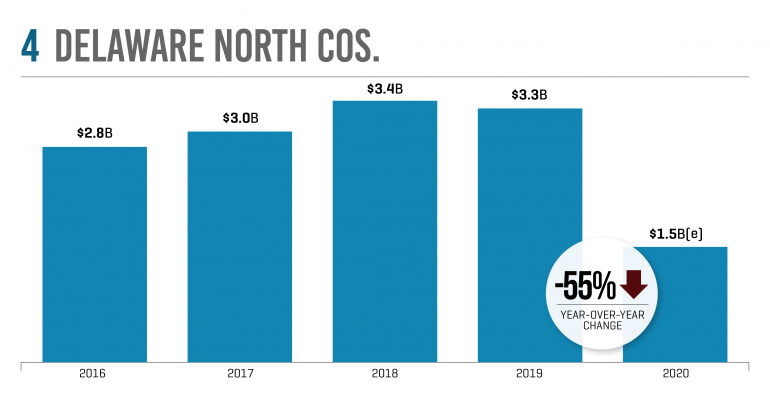 With business concentrated in sports, entertainment, travel and recreation, Delaware North was among the hardest hit Top 50 foodservice management firms, but the company has responded with a number of initiatives to mitigate the impact and position itself for future growth.

If you list the onsite dining markets hardest hit by the COVID-19 pandemic in 2020, you’d probably also list the major markets Delaware North operates in at the same time—perhaps with the exception of corporate dining. Airports saw most travel dry up, casinos and convention/conference centers went dark, sports facilities closed their doors in the spring and even if/when they reopened it was to miniscule crowds, and parks and resorts mostly stopped offering the dining and lodging amenities concessions companies operate even in the few cases where they allowed visitors.

These are the markets in which Delaware North has operated so successfully for most of its history, so it’s no wonder 2020 was without question the bleakest year in the company’s history. While it declined to provide Top 50 numbers to Food Management, we estimate business was down well over 50%, and that’s probably being generous.

We do know that Delaware North moved aggressively to cut costs, unfortunately and inevitably meaning large numbers of layoffs, and also started implementing some of the systems that hopefully will position the company for growth again as the effects of the pandemic recede. Prominent among these is concerted moves into unmanned, cashless and remote-service technologies that not only accommodate current regulatory safety protocols and future customer safety concerns but also will reduce operating costs while extending the reach of services.

For example, last fall Delaware North partnered with the NFL’s Green Bay Packers on concession upgrades at the team’s Lambeau Field home stadium with five new grab-and-go markets menuing high-volume sales items such as barbecue, bratwurst, pizza, beer and cheese curds for the 2020 NFL season that are tied to a self-checkout system using the Appetize point-of-sale platform. It also teamed up with retail tech company Accel Robotics to create automated retail stores where customers can walk in, get what they want and walk out without need for interaction with a cashier or even an automated checkout unit.

Then, early in 2021, it partnered with payments technology firm InComm Payments to implement the latter’s cashless payment solution at select sports venues where it operates food and retail services. InComm’s system allows fans to exchange cash for a branded gift card without paying a purchase fee at a venue's guest services office and other locations that they can then use to buy food, merchandise and other goods.

Most recently, Delaware North installed two checkout-free retail outlets featuring Amazon’s Just Walk Out technology at Boston’s TD Garden, home arena of the NBA’s Boston Celtics and the NHL’s Boston Bruins. The new MRKT-branded outlets use an electronic gate, computer vision technology and a system of sensors to enable consumers to purchase items and leave the store without having to produce a physical payment device, such as a credit card.

To serve fans allowed to attend Major League Baseball’s National League Championship Series and World Series games at Globe Life Field in Texas last fall, Delaware North, which operates food and beverage at the ballpark, went all-cashless with all fixed points of sale offering tap or scan payment options. In addition, fans could visit ordering kiosks for select concessions stands and order remotely for contactless pickup. A majority of Globe Life’s concession outlets were open with menus featuring traditional ballpark favorites while packaged snacks and beverages were available at a variety of grab-and-go locations. Encouragingly, the result was a significant increase in per capita spending at the 2020 World Series.

In its airport operations, where it instituted its Safe Travels: Commitment to Care platform to ensure proper safety precautions such as sanitizing and distancing, Delaware North also implemented touchless ordering and payment and most of its airport locations now offer mobile ordering while all point-of-sale locations can process mobile wallet transactions such as Apple Pay and Google Pay.

More specifically, it partnered with Grab to roll out virtual kiosks at quick-serve restaurants in Hartsfield-Jackson Atlanta International Airport and Tampa International Airport. The kiosks let passengers use their mobile devices to scan a QR code from signage, pull up a digital menu, order and pay, hence avoiding ordering lines while either picking their orders up at a designated pickup location or, in some cases, getting it delivered to them at departure gates.

In addition, many full-service airport restaurants the company operates have migrated from a server model to a system where guest are seated and then pull up a menu via a QR code and order, with a runner then delivering the order.

In other company news from the past year, Rick Abramson retired from his full-time job after 54 years that included stints heading the Sportservice and Parks & Resorts divisions. For the last three years, he had served as chief customer officer for the company and will stay connected with it as a part-time consultant and special advisor.