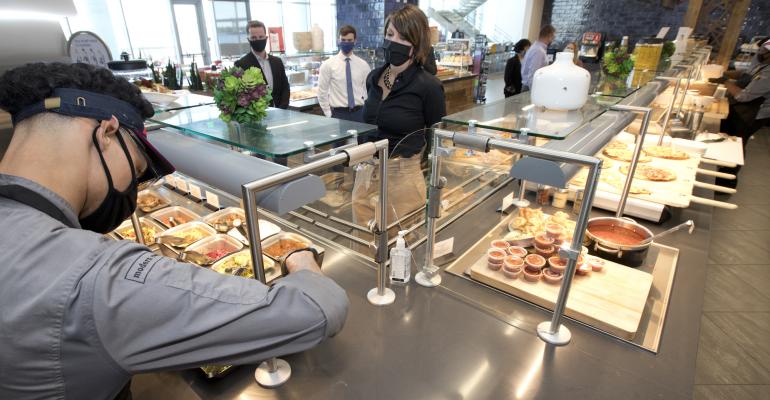 Sodexo positions itself for a post-pandemic operating environment

A sales drop in its first full fiscal year affected by the COVID pandemic was mitigated by some strong gains over the second half in Education and Corporate Services.

With an Aug. 31 ending date, Sodexo’s 2021 fiscal year was its first to be completely affected by the COVID pandemic, and the results unsurprisingly were negative, with the Paris-based firm’s North American unit realizing a sales drop of 13.3% relative to fiscal 2020. However, the second half did see a 19.4% increase over the 2020 second half, a period that covered the first six months of the pandemic, indicating that Sodexo was adjusting to the new realities. Among those adjustments was the expansion to North America of the company’s workplace dining platform Good Eating Co., which features locally sourced, bespoke food solutions, and the acquisitions of Nourish Inc.—a commissary kitchen model with 25 diverse cuisine options and an emphasis on fresh, vegetable-forward dishes—and restaurant aggregator Foodee, which expands Sodexo’s food technology platform for businesses with flexible and changing workforces. Now a part of the company’s corporate services division, Foodee features over 800 local restaurants in 14 cities across the U.S. and Canada, with plans to expand to include offerings in New York City, Los Angeles, Dallas and Montreal within the next year.

Most of these deals prominently target the evolving corporate dining market with technological and flexible service solutions, so their debuts may have helped the firm’s Corporate Services unit generate a 25% increase in sales in the 2021 fiscal year’s second half compared to the pandemic-devastated second half of fiscal 2020, though the unit was down 21.4% overall for the full 2021 fiscal year.

Sodexo’s Corporate Services unit includes not only B&I business but Sports & Leisure, which saw a strong rebound in the fourth quarter covering summer 2021, as well as the Government & Agencies and Energy & Resources divisions, both of which were also up significantly during the period due to the return to normal activity and new contract startups, particularly in Energy & Resources.

The Healthcare & Seniors unit was down 4.2% overall in fiscal 2021, though the second half did see a modest 1.9% increase. In its annual report, Sodexo observed about this unit that “while elective surgery has been picking up progressively, cross-selling has remained strong and retail sales started to pick up in the fourth quarter.” It also noted that the senior dining part of the business continued to suffer from occupancy shortfalls resulting from the effects of the pandemic.

Like Corporate Services, the Education unit—which covers both K-12 and college/university business—was down for the year—by 15.9%—but up significantly (47.6%) in the second half, when the comparison was to the first six months of the COVID outbreak.

“Whereas the return to school and universities was slow in the second and third quarters relative to Europe,” the annual report noted, “all sites reopened for the start of the new academic year in August.” There was also some summer camp activity and project work during the fourth quarter, it added.