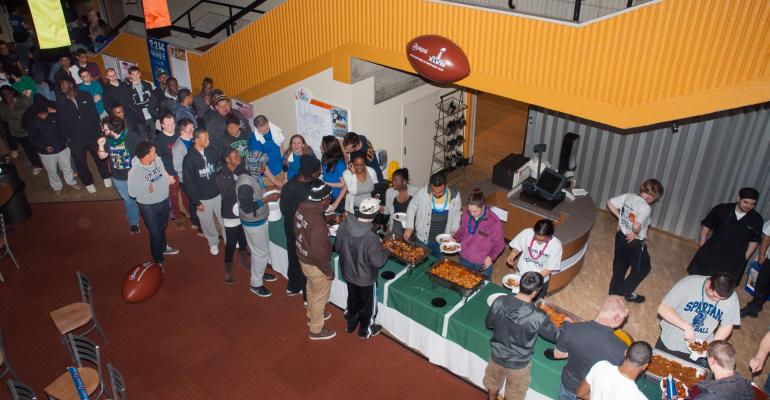 Shortly after students return from winter break, in the midst of studying for new classes and settling into the second semester, the football-championship-turned-media-spectacle is upon them. With the majority of students staying on campus for the big day, dining services at both schools have found fun ways to build hype.

For the past three years, UMass Dartmouth has hosted a huge Super Bowl watch party in its student center.

“Depending on what teams are playing, we could have anywhere between 400 and 500 students watch with us,” says Ed Gilmore, Director of Dining Services at UMass Dartmouth, which has over 4,000 students on meal plans. “If the Patriots are in the game, participation increases a hundred-fold.”

The party is hosted in the school’s student center where 10-foot screens are rolled down from the ceiling. There is live music as well as dozens of games with prizes like iPads and school swag. They also set up elaborate food displays including a wing dipping station where a number of different sauces—including barbecue and hot sauce—cascade from dedicated fountains.

Over the years, UMass’ party has grown in size and scope and now includes an over-21 space, too.

“The goal is to have fun and stay safe,” says Gilmore. “It also helps to build community within our student population.”

At Xavier, Dining Services hosts an annual tailgate to celebrate the Super Bowl. 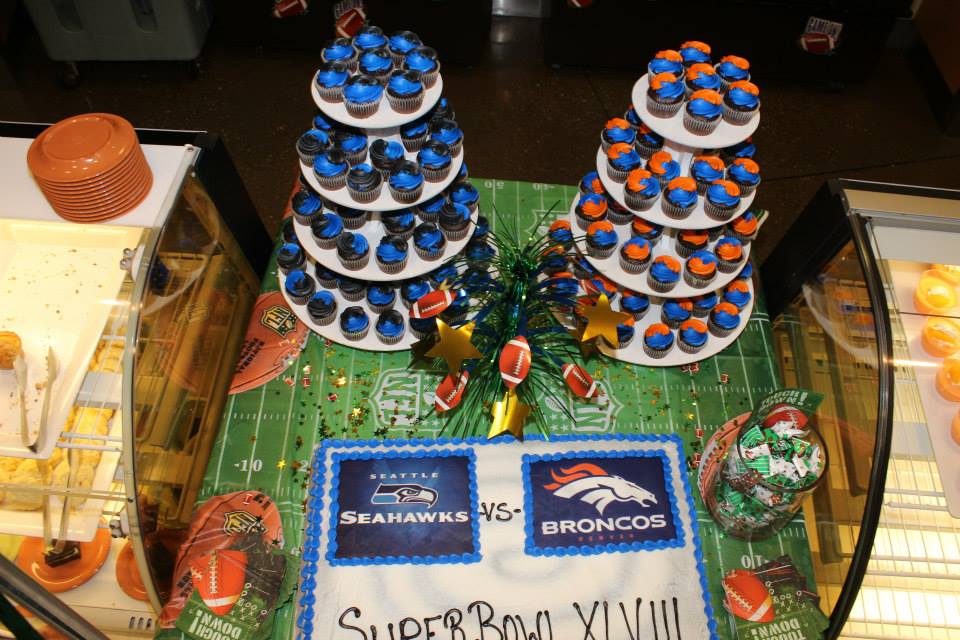 “Our staff gets really involved in the planning and execution,” says Ed Devoid, Director of Residential Dining. “They come up with creative displays—like a football field made out of crudité—and wear jerseys, hats and other football gear to help root for their favorite teams.”

Both schools promote their game day celebrations via social media as well as through flyers and traditional signage.

“Our dining hall is located inside our main residence hall so we get a lot of traffic at our tailgate,” says Xavier’s Devoid. “We decorate all the stations, too, to help set the tone.”

Shippensburg (PA) University takes the game’s name literally by offering a promotion called “Souper Bowls” around the same time as the big game.

“We have the bakeshop make bread bowls for our soups,” says Brooke Hall, Assistant Director of Retail. “Then we offer three or four soups, like Chili, Chicken and Corn, or Vegetable.”

Last year, the school bought some inexpensive green turf and marked everything off with tape like a real football field, to help set the mood.

“We’ve also offered additional menu items that are themed to the two teams’ cities,” says Hall. “When the Steelers were in the Super Bowl, we offered a spin on Primanti Bros Sandwiches which stack french fries and coleslaw on traditional deli sandwiches. For Philly, we offered cheesesteaks.”

Put aside points scored and yards run, when it comes to the Super Bowl for these three schools, it’s all about food and fun.